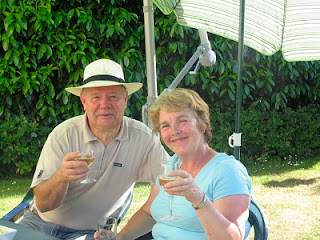 We are Jim and Pauline Craig a Scottish couple the wrong side of fifty who in 2005 decided to invest in a holiday home in . We chose a house in the small  of Barrou in Sothern  ( how and why later ). We say invest as even then we had a desire to one day move here on a permanent basis. We had to look at something that might provide an income stream as we knew we couldn’t actually retire to . Our least favourite people in the world ‘The Royal Bank of Scotland’ ( we decided to 'name names' )  four years prior to this, demanded the loin’s share of our then business and our house, they had decided they would not support a traditional business which was experiencing cash flow problems without hefty 'conditions' - we said no!. It appears they wanted to keep their money to provide ill fated 'buy-to-letters' and 'get-rich-quick-schemers' with enough rope…. ( Do we sound a tad bitter?)

They actually did us a favour – we had to make life-changing decisions and make a fresh start.. We managed to get back into running a smaller business and through this and our house renovations over the years (we moved 6 times in ) we arrived at a position where we could up-sticks and make a permanent move to . After selling up in  we bought a second house to renovate in nearby Le Grand Pressigny.

We had, by this time, started to rent out our Barrou home as a holiday gite after it had been ‘test-driven’ by some friends and family. Doing it remotely was a bit of a risk but with the help of some new found friends, in and around Barrou, we managed to successfully launch the ‘Loire Valley Experience’. This made the permanent move easier and with our new ‘project’ in le Grand Pressigny awaiting us we made the move.

When the work on the Le Grand Pressigny house was completed, after two years, (will do a little on this in the blog) we also offered this for rent. As we were not sure how this would book we decided to offer the Barrou house for rent as well.The plan was we would live in the one that was not booked - we shouldn't have worried! Just to make it a little more complicated we took over the management / booking of another house 'Le Bourg'  in Barrou - so now it was 'perm any one from three'!

Update: We now live permanently in our Barrou house and have plans to convert the barn there to another gite...some time in the future.

Here are some of our experiences.

I am responsible for www.experienceloire.com