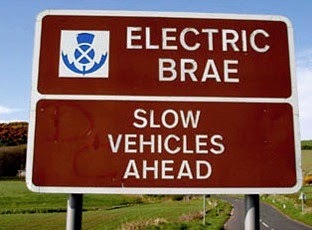 Just down the road from us here in Ayr is a small length of road with a phenomenon that for years was thought to be caused by some sinister force or electric or magnetic attraction within the road - cars, indeed ever thing apparently rolls up the brae (hill) of its own accord. You can see the 'phenomenon' in action in the video below - though you might want to turn off the sound as a few expletives are used to describe their reaction.


As it happens it is just an optical illusion as the configuration of the land on either side of the road makes it look as if the slope is going the other way - but even knowing this it is still not easy to understand...I'm sure just as I was as a child that it is in fact 'Electric'

The sign above is no longer there as the local council got fed up replacing it as it was apparently stolen so many times. There is now a cairn in the lay-by in the middle of the slope explaining the 'phenominum',Mike has a photo, but if you weren't aware of it you would easily drive past and miss the experience...which would be a shame!
Posted by Loire Valley experiences at 08:30