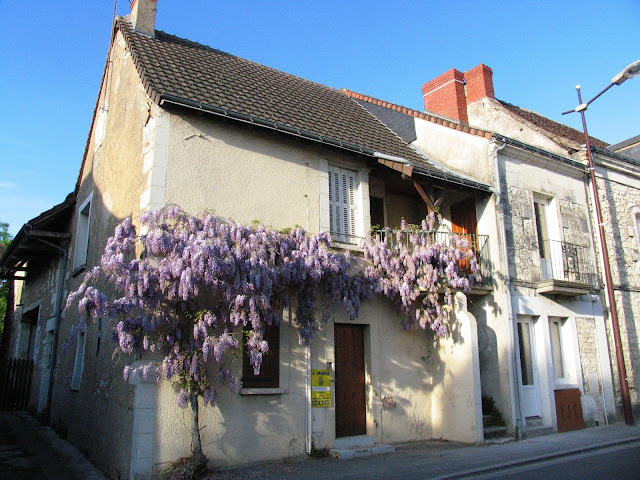 This little house is on Grand Rue here in Barrou. Its wisteria always puts on a great show after being cut hard back mysteriously (never seen it being worked on) every year. The house and I can only presume,the wisteria, have been up for sale for a while now. It is only the downstairs section as the steps lead to a separate small apartment. I have actually had the 'tour' of the house as a prospective purchaser,although not by choice!

I was coming back from the boulangerie one morning when an old gent ushered me in, thinking he was looking for assistance,I followed. Once in the 'house' which is actually tiny he explained to me he had only kept it as a place to use when he was in the area for 'La Chasse' (hunting) but he was now of an age where this was no longer possible.He also let me know,I'm sure there was a tear in his eye,that he had also lost his favourite hunting dog, whose large framed photo hung above the mantelpiece. Interestingly he, the dog, seemed to be staring out the Boar's head mounted on the opposite wall!

He was an interesting and charming character and had obviously heard the story of us buying up the village (we are not) and probably thought it would be a valuable asset to our (non)expanding portfolio .

If you are interested he let me know you also get 'part of the lane' to the side of the house,though not sure which part!
Posted by Loire Valley experiences at 06:30