One of the few ways I stay in touch with what is going on back in Scotland is by receiving the the daily headlines from http://www.heraldscotland.com. Yesterdays headline of "Scottish crime writer is victim of bad plot" caught my eye. It revolved around the fact that Scottish crime writer Logan Mc Rae who had been given poor reviews on Amazon for his latest novel. Nothing unusual about that and 'Nicodemus Jones' is entitled to his opinion - sadly however it turns out that the said Mr Jones is none other than fellow crime writer R.J. Ellory. The same Mr Ellory who apparently,under a pseudonym of course, called his latest tome 'A Quiet Belief in Angels' a "modern masterpiece" 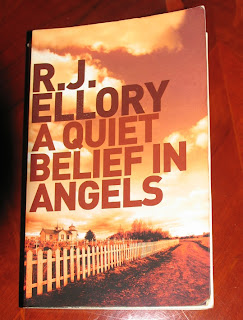 You may (or may not) know I love a good coincidence,except when its used by poor screen writers to make sense of a bad plot, so as I was reading the article I raised a small smile in the knowledge that the well-read Mrs Craig was chomping her way through the very 'masterpiece'!! (Review later but probably not using her real name).

The power of the internet to influence peoples buying decisions is becoming more and more apparent and like everything else that can be abused it is, by some people. Being in the 'Travel Industry' in the small way we are, we watch this manifesting itself through the ever growing influence of people like 'Tripadviser' a site where a bad review, true or otherwise, can harm a business's reputation irrevocably. It is interesting to note that their group continues to make acquisitions like 'Holiday Lettings' where reviews play a big part in people's choices- no conflict of interest there then!

Posted by Loire Valley experiences at 08:01