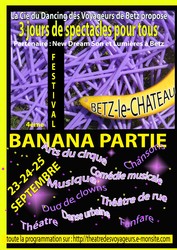 One of the great things about our area of  the Loire Valley in France,probably the rest of the country too, is their penchant (isn't it amazing how many French words we actually use in our language) for fetes and festivals. The banana festival at Betz Le Chateau had always intrigued me so we 'sallied forth' last weekend to find out what was going on. It had been advertised as:   "Three days of entertainment for all, Friday night, a comedy groups, a Saturday morning children's show (3 months, 3 years) by Coy globetrotter, 15 h, a show for children by Coy Street detours, then various free outdoor shows, circus workshops, free for children, and at night great show for all." (google translation) 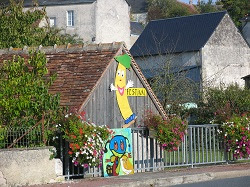 We didn't arrive in the village until 5.00pm on the Sunday and apart from the cut-out bananas on display there was no sign of the festivities - The 3 days are I think aimed primarily at the children of the village, with the star of the show being, to my eyes, a rather scary 'bananaman'. 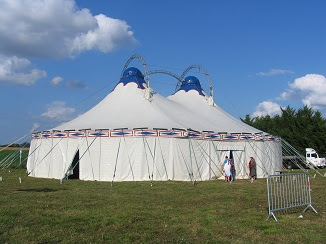 and there it was- they obviously had no trouble with crowd control! 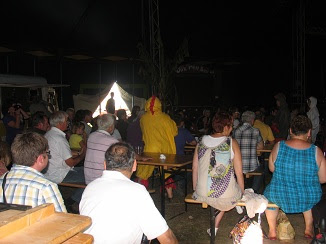 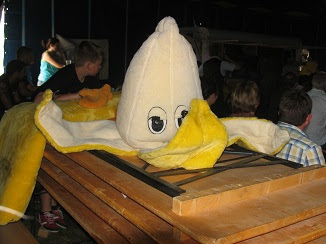 Inside people in chicken costumes were running around trying to rouse the crowd into a frenzy - it wasn't working! The audiences here never seem to quite match the enthusiasm of the performers who are obviously all on 'Duracells' (see video below). It was sad to see that Bananaman had had one too many. 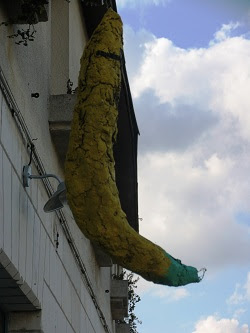 As we were returning back through the village we noticed this sad looking banana  - it got us wondering if maybe somewhere there was a chilli party  and some yellow paint had been applied. You certainly can't fault the village for lack of application! If someone happens to know the origin of the party I'd be delighted to hear it,

Here is a youtube video from 2010's 'party'.
You have to admire the parking skills of the driver,

Posted by Loire Valley experiences at 09:44

Email ThisBlogThis!Share to TwitterShare to FacebookShare to Pinterest
Labels: fetes, towns and villages