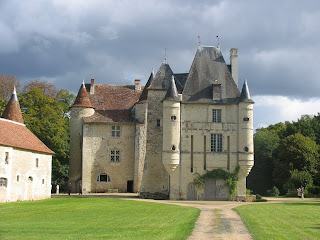 Our last 'Patrimoine Day' in the Loire Valley we decided to visit Chateau Rouvray, a small private 'residence' outside the village of Chambon, 7km from our own village of Barrou. We had in the past driven up to the gates and like the poor relations peeked through to see how 'the other half' ( what is the origin of this phrase,I wonder?) live, so it was good to walk through them. This is a castle where the oldest parts date back to the 12th century followed by a rebuilding project during the 14th. As you walk down the driveway you could be forgiven for thinking that you are looking at only one building, though the roofs are a bit of a 'giveaway' but it is in fact two seperate constructions. 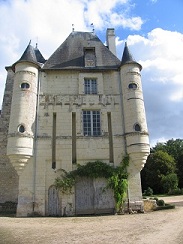 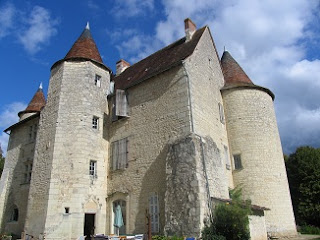 We were only allowed to view the chateau from the outside apparently the inside has been modified as a domestic residence and no longer has any historical merit - it would have been good if we could have judged for ourselves.

It used to have a dry moat, which has been filled in, plus other defensive features including a perimeter wall with four turrets, two of which are now long gone, along with the wall. What we see today is the result of the need to make what was a medieval fortress into a building that can be used for modern living.
So to the end of 'Patrimoine Day' where we had good company, a blast of culture and history plus lunch in a cave - the almost perfect day?

Another couple who were out and about on Patrimoine day  - check out:
http://chezcharnizay.blogspot.com/2011/09/journees-de-patrimoine.html

Posted by Loire Valley experiences at 14:23