This was the weekend (Saturday 17 & Sunday 18 – Journées du Patrimoine) of the year when houses and monuments in France and our own region Centre-Val de Loire, whose doors are normally closed, or who charge an admission, freely open up to the general public and take you to places not normally seen. Pauline and I, together with friends David and Karen, managed to make a full day of visits starting with...my son Mark who has a very good English degree and aspires to be a writer says I'm only allowed three dots here - and he should know but hey life's too short and so are these dots........sorry I digress,,,,,, 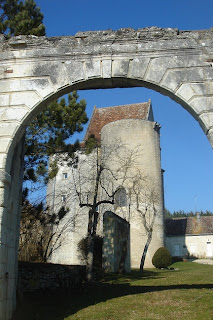 Our first visit was to the small castle (chateau) at the appropriately named 'Betz-le-Château ' where Pauline and I were making our third attempt to view the underground tunneling. We first tried two years ago when we drove here to find that in spite of the official brochure telling us it was open, arrived to find the gates closed and a sign telling us nothing other than it was 'ferme'.We were not the only people to try but here in France you just shrug  ('Gaelic shrug') your shoulders and move on. Last year it was open but by the time we arrived the queue was such that we were told it could be over an hour before we could go in - we shrugged our shoulders and moved on ......(sorry Mark) 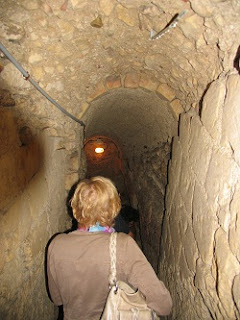 Yesterday was better planned. We set off early, though not as early as planned (you know who you are!) but still arrived well before any crowds. We were treated to a guided visit by a very amiable lady who was kind enough to give us some English translations (David was also a great help) which added to the experience. What a lot of digging must have gone on to create this labyrinth of tunnels. They should have perhaps tried the John Lennon  approach and given peace a chance - could have saved them so much work. If you are visiting Southern Touraine on Patrimoine day seek it out. 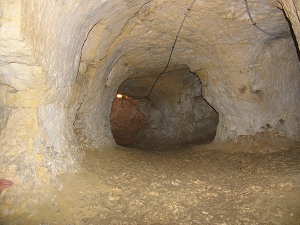 Next weekend the village of  Betz-le-Château has its annual Banana Party (honest) -- can't wait !

Posted by Loire Valley experiences at 11:08