When we were over at the brocante at Villeperdue  we spotted this company car - Tupperware giving cars to 'party planners'? 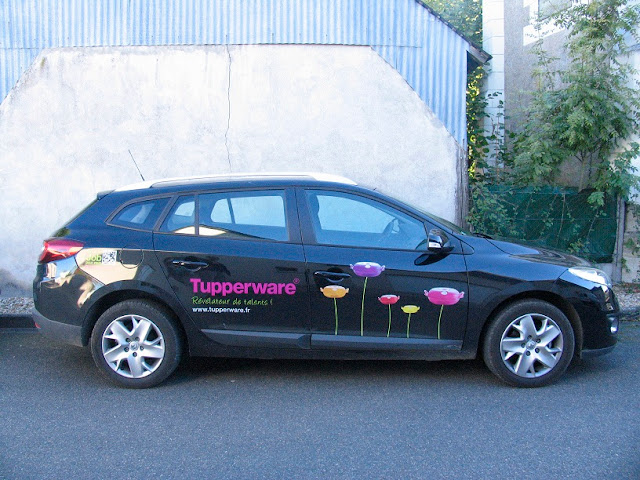 This was a surprise as we had long forgotten about this versatile product - although it has been cropping up at brocantes - you rarely hear about it in the UK now, what  with all the alternatives that have appeared over the years. Apparently it was still available and being promoted up until 2003 when the company decided to close down its operation in the UK.

I can recall the bubbly 'Tupperware Lady' descending on my parents house many years ago and being introduced to this wonderful plastic world of containers and lids. The now iconic cereal container being my personal favourite.You can see someone bestowing its virtues here. I think I also remember my sister being drawn in by the planner to extend the network - they loved this as it always meant a very good sale as the new planner had to buy all their stock. I seem to also recall her later ingenuity as to what they all could be used for!

The UK were all set for a grand relaunch in 2011 but after recruiting staff the company put the lid (an airtight one obviously) on the idea before the year was up.

Here is a 'planner', sorry they are now 'consultants' doing her stuff. Apparently a Walrus made an appearance at a recent Tupperware party - looking for a Tight Seal. (Blame 200swilson for this)
I think I would be more interested in going to a Tupperware soirée than a party - then again perhaps not!

Footnote: It's all Earl Silas Tupper's Fault.
Colin & Elizabeth blogged about Tupperware back in October 2011
Posted by Loire Valley experiences at 07:59