Fortune favours the brave...or should that read mad.

Left St.Chamond at 6.00 am after checking traffic was moving on autoroute and to avoid any congestion at Saint Etienne. Good plan as sailed past there and south of Lyon with only a couple of winter flourishes. It was only when we hit the high ground in the Auvergne on the way to Thiers that the winter weather kicked in with a vengeance...at one stage we were down to 30km/hr on a white road with no idea of lanes,with snow banked up on both sides, in the dark, alone with only a blizzard for company...was genuinely scared  though couldn't let Pauline know...she was nervously humming next to me in a non- too assuringly way. I actually got to the point where I thought I could not continue when we suddenly could see the road and eventually caught up with four other brave souls who were as mad as we were and stuck tight to them ...at least we were not alone! As dawn broke we all eventually caught up with a snow plough the other side of Thiers that allowed us and others we had caught up with to continue our journey in what were now great conditions to what we had just experienced.. 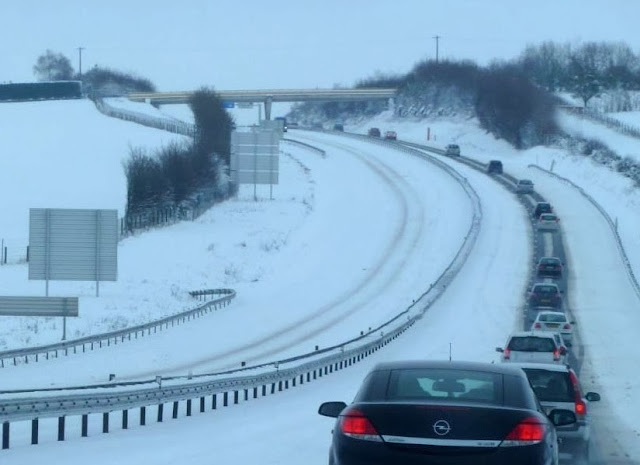 It was pretty much plain sailing after that with the weather improving the further north we got...however when we did hit some heavy snow at Chatereaux  it was like 'bring it on' after what we had experienced! Arriving home in Barrou at 11.30 was a great feeling as we genuinely thought at one point that we might never make it!

More of what came before tomorrow.
Posted by Loire Valley experiences at 06:30