Something to crow about...

When talking to a French neighbour, Caroline, in the street here in Barrou a few months ago we had reached the point where my French and her English had been exhausted (she does speak better English than I do French) she knocked on the window of her house from the outside to get the attention of her husband Jean-Pierre. His English is very good so we managed to finish our conversation before parting company.
There was a moment when,over his shoulder I was sure I saw a crow wander across the room - but I thought that maybe I had been mistaken. 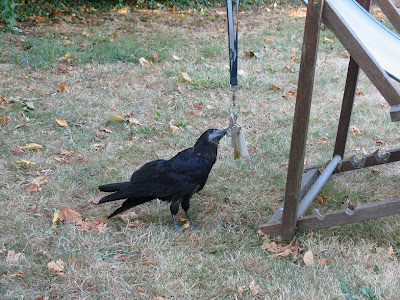 It wasn't until we were invited along for tea / aperitifs that we found out that yes, it was in fact a crow that they had rescued. Gus or LouLou, it was't until he started to do a courting dance towards  Jean-Pierre that they realised he was in fact a she, is now very much part of the family lording over the cats and providing much amusement for all.


LouLou takes a bath
Posted by Loire Valley experiences at 06:30