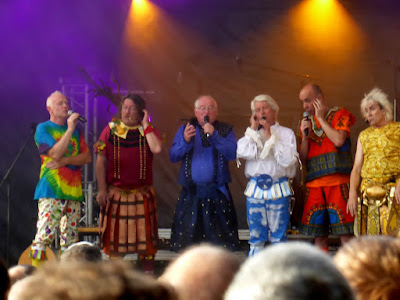 Before going to listen to the 'Tri Yann' on Sunday I had checked them out on t'internet and YouTube and was surprised with their pedigree. The band were formed way back in 1970 during the 'Folk Rock Revival' by three friends Jean Chocun, Jean-Paul Corbineau and Jean-Louis Jossic, thus the name 'Tti Yann' - the three Johns in Breton. The Johns are still in the band and have been doing their stuff for 45 years!!

Their 'stuff' consists of a set of 'Celtic' music performed in outlandish costumes (which they stayed in all night)
with rousing tunes that make it difficult not to clap along. Their opening number could have been made for Pauline and I...'Far away from Skye'...

but we were brought closer to home later...


They also did a song 'Onion Johnny' which I'd love to get a translation for...remember seeing these guys in my youth (where did that go) and thought they were local men pretending to be French, surely it couldn't be worthwhile cycling all the way from France with a bicycle of onions...I now know better (check out)

Posted by Loire Valley experiences at 08:16