I still had this post from Paris and because it features bicycles I have decided this week should be 'bicycle week' so every day will be a two-wheeler.post.

One of the great joys of being able to visit Paris so easily from here in the Loire Valley is that you experience a completely different view of France, from quiet slow paced country living to fast (well faster) paced city living. 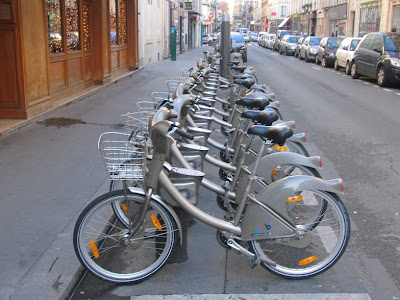 The two-wheeled mode of transport is very popular there for obvious reasons and is in evidence throughout the city in its various forms. You can rent a bikes in  called Velibs. ( vel for vélo "bike"and lib for "liberty").These can be picked up at any metro station or anywhere there's a "borne" (stand) of bikes,you can ride around for half an hour for free as long as you return them to another Velib' stand within the period. Apparently they are within 300 mtrs of each other - ! think if you want to use them you should pay the very reasonable .€ 1.70 for the day (using a credit card) or for the more adventurous  €8.00 for the week.

I like the way they have tried to make them look as cool as possible (French designer of course) - though I'm not so sure about the baskets! Where I can understand their practical nature I think it diminishes some of its 'cool', maybe they should offer some 'basket-free'.  The official website for the bikes can be found here...
Posted by Loire Valley experiences at 07:00